This section of the mountain may (or may not) cover the “restoration” of a 1995 Citroen AX 1.5D, purchased by my youngest son for not a lot of money as a replacement for his AX Dimension of the same age. “It’s quite good dad” he announced as he assured me he had checked all the usual areas for rust – inner wings at the front, front bumper mounts, “Y” chassis box section below the front seats and the rear end of the sills. More worrying is the horrific “grinding noise” clearly audible above the clatter of the 1.5 litre diesel engine at anything above 5 MPH !!!.

Anyway this weekend saw the start of me taking a closer inspection. 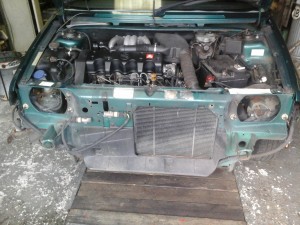 Started by stripping off headlamps, indicators, bumper, grille and bonnet. At this stage the extent of some of the rust could be seen. 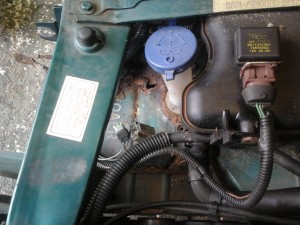 Inner front wing, notorious rust spot Peugeot 106’s don’t rust half as badly here as the have full wheel arch liners, the AX only has liners for the rear half of the arch so this area suffers badly. If you are lucky you can pick up a scrap 106 and cut this section ou – its identical and makes a perfect repair panel. 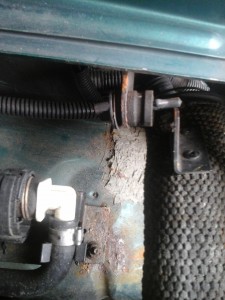 This is the passenger side inner wing. The previous owner as spread a bit of body filler in the affected area – pretty useless really. 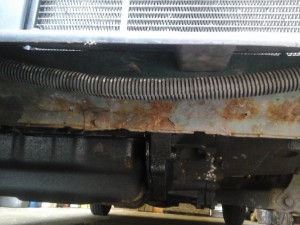 This is sign that the rust is worse than first thought. Its the cross member below the radiator, though you can’t see it the rear seaction has rusted right through. The good thing is it is a simple square box section so easy to fabricate and graft in a new one! 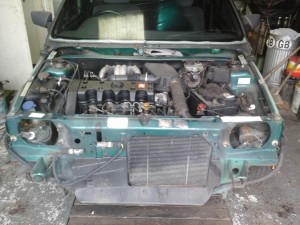 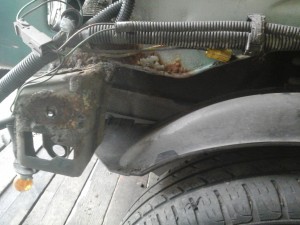 This reveals the rusty bumper mounts and rust further up on the inner wing. (below) 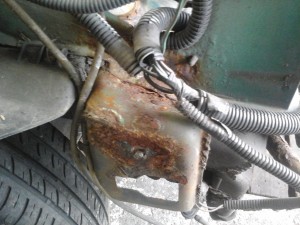 Drivers side bumper mount – really quite weak. (Not that the AX was ever strong even when new) 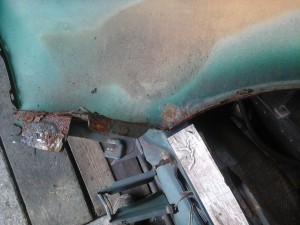 Disappointingly the wings themselves which ar e usually very good were rusty around the edges – may try to get hold of some better ones. 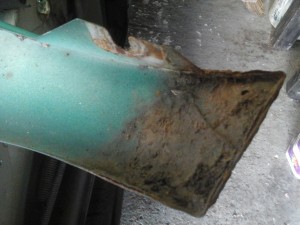 Having depressed myself with the amount of rust repairs I thought it best to move onto checking out the grinding noise.  This to me sounded like a really shot wheelbearing – especially as it disappeared when cornering left and got worse when cornering right. I guessed nearside (passenger side to the layman) – see next post for wheel bearing replacement.